So, my wife looked up her ancestry on familysearch.org.  She descends from Hyrum Smith, through the sister of Joseph Fielding Smith, Martha Ann.  As I looked up the children of Hyrum and Mary Fielding, I discovered the surprising fact that Joseph F. and Martha Ann have siblings (listed) who were born as early as 1791, and some few born before 1810.  You’ll want to know that Hyrum Smith, father of Martha Ann, was reportedly born in 1800.  Thus, according to familysearch.org, the Lord’s Verily Veritable Historical Experience TM, Hyrum fathered children nearly a decade before he was himself fathered.

And if you click on the child born in 1791, you’ll find his own siblings don’t list Martha Ann or Joseph F., leaving us to conclude that he is a brother to one who is not his sister.  Reciprocating kin terms have no reality in the Correlated world of FamilySearch.  Rather, chronologies are tossed out, physical impossibilities give no guide to algorithms, and truth is decided by anonymous users in a manner that Wikipedia builds its database.  There are no standards, nor peer review; one can just punch in a name, enter a birthdate, and a parental relationship.  In fairness, however, to Wikipedia, they have a good search engine, an intelligent interface, and do not claim to leverage salvation for souls therein named.  And they are, unlike the Church, a non-profit.

FamilySearch allows one to invent persons, or by misspelling or capitalizing, to create new persons, all for the living to save through vicarious rituals.

Perhaps, you say, perhaps the folks at FamilySearch are going on spiritual children, adoptions and so on, when they say that Martha Ann has a sibling older than her own father, but one to whom she is not a sister?  Take a look at John D. Lee’s parents, and you’ll not find Brigham Young listed as his father. 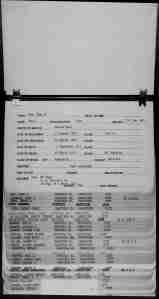 That is, if you can find John D Lee at all, even searching for his birth and death dates.  Born of Ralph Lee, John D. was adopted as a son by Young, and sealed by the holy power of the priesthood.  Indeed, nearly every Mormon was adopted as a son or daughter of a prominent Mormon, and yet none of these show up on familysearch.org as legitimate kin relations.  Only legally recognized adoptions are recorded.  Meaning?

Familysearch.org seems to be undoing the work of sealing that was so important to Joseph Smith and others, they teaching that in the absence of such a sealing link, tying oneself back to Joseph Smith, and then to Adam, that if this failed the earth would be cursed.  Familysearch.org is proof of our cursing, if you’ve ever tried to find anyone using its search engine.  What is going on, really?

The Family History Department of the Corporation of the Presiding Bishop is a real heavyweight at the COB (and that saying something); they always have projects for others to fill their days with, and they get what they want; including several floors in the Joseph Smith Building, and all the computer equipment they desire.  When a new program like familysearch is being tested, a select few get to pick cities where they can set Mormons before computers to try out the software.  Invariably the cities selected are not third world, but rather the likes of New York, Boston, London, Sydney, and so on.  The old ladies and missionaries who test the software apparently don’t tell the User Experience guys that they can’t find anything using it, and that a capitalized letter will throw off a search entirely.  Nothing but glowing reviews, and in reality many endless problems.

Now they rely on “user input” to regulate the databases; keep in mind that there are no standards widely shared by such users for what counts as truth, as verification, or history.  One could decide to contrive a kin relation because one “feels the spirit,” or because two names seem to closely match.  The number of user errors explodes, but the regulation of such errors does not follow that explosion.  We are dealing with a cultural problem framing a content distinction, and that is why one cannot take a form of one thing, and apply it as a solution for the problems of some other thing.

Though contrived in the image of Wikipedia, the content they manage is so different that FamilySearch cannot rely on user input for regulating the content’s validity.  One can write anything about In-N-Out Burger on WikiPedia, of course; but most claims not verified independently are quickly removed by other users who share an interest in the truth, or the image of it; and share methods for arriving at  it; and for agreeing that such and such a claim is acceptable as true.  With FamilySearch, however, we have no shared framework that can be relied on for ensuring accuracy in the database.  Thus, we have the possibility for endless revisions, and of one dead person generating ten or twenty “ordinance” records.  Error and confusion abounds, while their resolution lingers.  Even with their own central figures, like Hyrum Smith, whose progeny are consistently high up on the corporate ladder, even here they cannot minimize error.  Joseph Smith is listed as the father of a “Mr. Smith”.  Seriously.  Mr. Smith.

As a result of their own built-in structural stupidity, the Family History Department and the Temple Department gain greater power and prestige: for every mistake, all their incompetence, only ensures that they will have more work, and bigger budgets, the next year.  How’s that for a business model?  It is no different than what the overall COB is structured by: a metaphor of capitalism, but without the reality of the market to provide accountability to and direction for the work of production.  They have the forms of capitalism, but deny the power thereof; with their wallets they draw near unto it, spending like drunken sailors on whatever the whore of babylon bares for them, but their malls are far from good business, being subsidized in a way that incentivizes stupidity.

In other words, all this talk about saving the dead by ‘ordinances’ seems to not realize that we are sealing up the human family in a manner neither concordant with physical reality, nor fitting our own teachings about spiritual relationships.  We are sealing them up according to guesswork by users, so that we can be sure to go the temple, or so that we can our spiritual high this week; more often than not the dead are images we exploit to satisfy our own spiritual vacuity, just as the corporation exploits our ignorance for its own prestige, gain, and power.  Nevermind the good people there; it is structural.

Those who believe the sealing powers reside in the Corporation of the President of the Church of Jesus Christ of Latter-day Saints have the burden of explaining why they are sealing souls to non-existent things, to computer inventions, to errors of spelling, and why they are not re-ordering the Human Family as Joseph Smith said it should be, according to spiritual principles.  I understand that we ought to have charity, and folks do their best; but there is another way, surely.

Instead, all this work and sacrifice and spiritual experience feeds the vast and widening resource sink; rather than feeding the living, we work for our own invented persons, sealing them to the likes of AdOlph Hitler, Adolf HITLER, AdolF Hitler, and so on.   Now the idiocy of the Family History Department can ensure that Public Relations has a plate to keep spinning, in this absurd corporate game called the Church; the whole monstrosity is a mockery of even the minimally intelligent corporate capitalist form.

Not that you asked, but I’m convinced that no work for the dead should be done until the dead person comes to you and tells you exactly what ought to be done.