The second volume of the Cultural History of the Book of Mormon is finally finished and available for purchase.

Due to the length of the volume, it is published in two separate books: 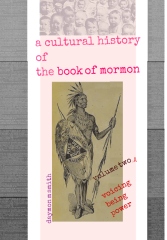 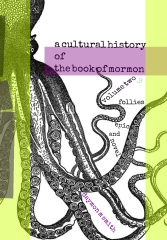 These books will be available on Kindle and Amazon in a day or two.

Volume One: Setting, A Foundation, of Stones to Stumble Over is available from the publisher, Amazon, and Kindle.

Check out some reviews, and get started undoing all you thought you knew about Mormonism and the Book of Mormon.

Continuing the ground-breaking first volume’s emphasis on Kirtland Restorationists, Part A of the second volume describes the particular textual practices that pinned their readings of the Bible onto the pages of the Book of Mormon, and spread that reading across a landscape.  This volume also reconstructs how these Restorationist’s readings were scattered across the globe under the name “Mormonism” or “the Gospel,” as the writings of Parley Pratt were copied, quoted, and fragmented into a thousand elders’ voices.  This is Part A of Volume Two, which concludes with Part B, Follies Epic and Novel.  A preview of B is included.

(From the Back Cover)

Into the pews and among the pillars of a restored church, this one raised on the words of Alexander Campbell, Sidney Rigdon, Stone and Scott, landed the Book of Mormon.  Only months after its release from Grandin’s press, Rigdon’s congregation and Morley’s “family” read their doctrines, practices, and supposed restoration of Ancient Things onto the pages of that book.  They integrated it into their church.  How the Disciples did it—the specific practices that tied one book to another, and both into a new thing called Mormonism—is told here.

The Book of Mormon became the Mormonite’s second scripture alongside the Bible, whose most mysterious and obscure passages, purportedly received from the hands of Ezekiel, Isaiah, and David, were said to prophesy of its coming forth.  That book was made to “voice” the Bible, even as the Bible was said to foretell of its release.  The doctrine of “voicing” allows us to see how metatext was picked up by living speakers who also created an imaginary thing—Mormonism, the Gospel, etc.—said to exist independently of their speaking.    We ride along in Part A of Volume Two with Mormonite preachers as they re-arrange the Book of Mormon into thematic sequences better suited to proselytizing Christians, and see how their Mormonism of the1840s and 1850s was the creation of Parley Pratt and his pamphlets, so often recited, copied, and voiced by elders who spread his Mormonism—and its reading of the Book of Mormon as supplementary to the Bible—across and beyond the British empire.

(From the Back Cover)

Most of what Joseph Smith seemed to have hoped for, with respect to Saints on the Mississippi, came to an end with his death.  The Saints did as they always do, picked up the pieces and carried on.  Once in Utah, or Deseret as they insisted it be named, Mormons realized they were out of the lands Joseph Smith called Zion; living beyond the End they once thought would come in 1845.  “What are we doing here,” you can still hear them asking in between the lines of sermon after sermon; in Brigham Young’s belligerence and retreat; in calling one another prophet, seer, and revelator, titles more hopeful than accurate; and in every apostles’ eagerly undertaken mission to Europe.  The Book of Mormon was no help answering, after the Lord’s Chosen People had wandered to this desert.

In Utah, as we see here, Mormons fell outside their myth: beyond the geography of Joseph’s American Eden, while the Lord’s Coming seemed long overdue.  They looked for plume and pillar of fire over Sinai, for seraphim to place coals upon their lips, for the City of God to descend, its people to kiss their poverty from dry cheeks.  They were Israel gathering.  But that was all in the future, when Joseph Smith voiced the Lord in January 1841, and warned of them working cursings by their own hands.  In this Part B of Volume Two, the cultural history explores the implications of their move from Nauvoo to Utah, from Joseph to Brigham, from Restorationism to Zionism.  It shows what happens to Saints when they leave their map—the Book of Mormon—far behind, having so long misread it.  Like what it says about kings, for example . . .